Many fellow actors and comedians soon chimed in to pay their respects, among them was Steve Martin. Martin’s tweet read “When I was a young man, Carrie Fisher she was the most beautiful creature I had ever seen. She turned out to be witty and bright as well.”(screenshot below) 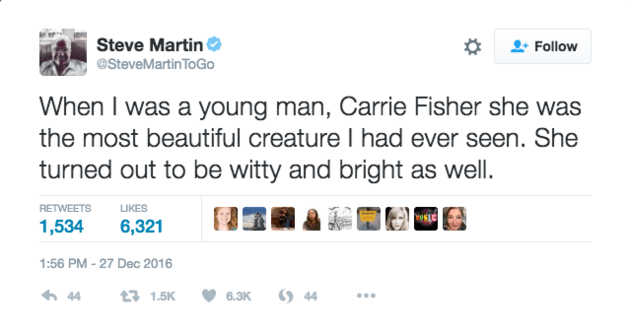 Many were appalled at this sentiment which led to it’s removal. Though this comment may have come off as sexist, it was ultimately true! Carrie Fisher was the best of all worlds, beautiful, funny and smart, but she was also troubled.

Fisher admitted to her cocaine use during the making of the Star Wars sequel “The Empire Strikes Back.” She was also open when talking about her addiction to prescription medications, namely Percodan.

During an interview with CNN’s Larry King in 1990 Fisher was asked “Do you know why were you an addict? Is that explainable? She went on to answer:

“One of the side effects of Percodan is euphoria, and i thought, that was a side effect i could easily live with. It doesn’t matter that the rest of them that follow that are palpitations, heart attack and death. I couldn’t get over euphoria.”

It is known that the prolonged use of drugs like cocaine and Percodan cause certain cardio vascular effects on the body, like variant angina, ventricular ectopy, and conduction abnormalities. This prolonged use of drugs may or may not have contributed to the actors initial heart attack, but undoubtedly weakened her heart, which decreased her chances of surviving her heart attack.

The news of Carrie Fishers death was terrible, but it can also be eye opening for many struggling with drugs today. Get help today! Addiction is tough, but above all else it can be fatal. If you or a loved one have a substance abuse problem call Horizons Recovery today at (888) 415-9900. We offer a wide variety of treatment programs to suit your needs. Take control of your life today! 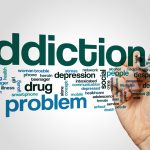 The Effects of Substance Abuse